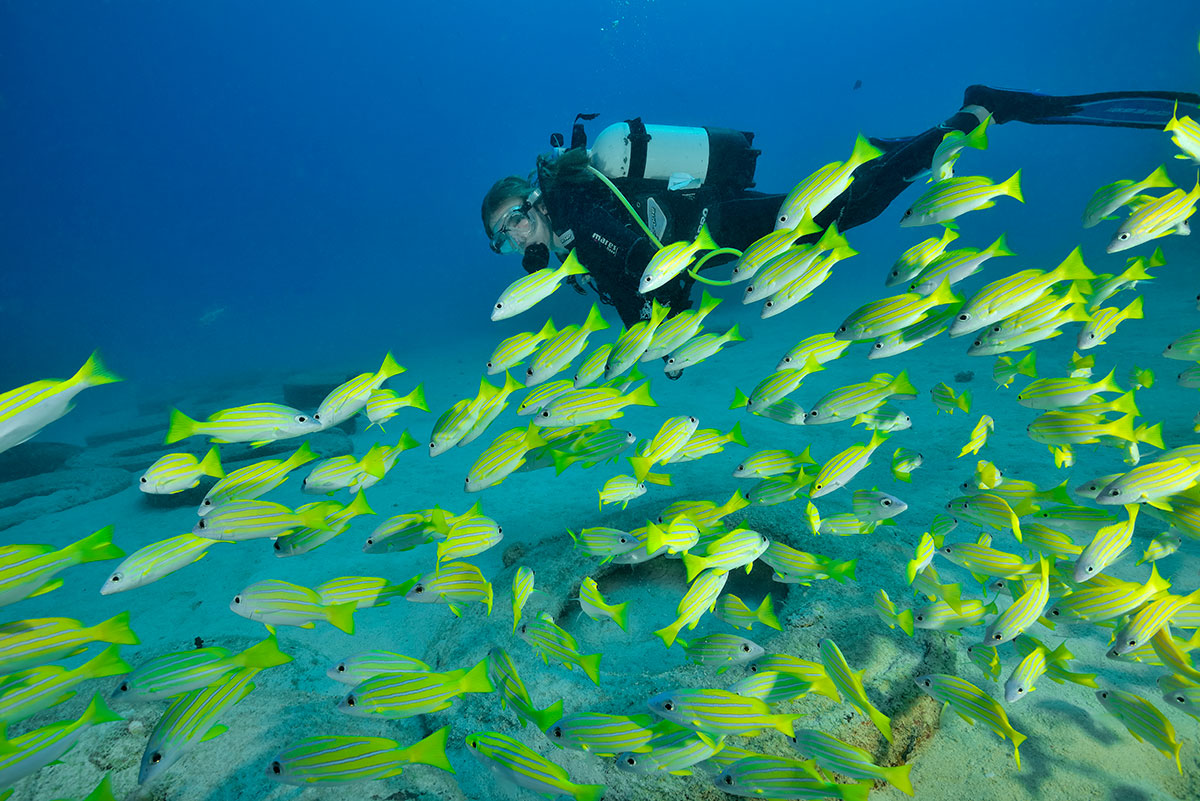 Flic en Flac is on the west coast of Mauritius and a favourite of many divers! The dive site called “Cathedral” is located here and it is considered one of the best dive sites in Mauritius. Indeed, starting at 18 meters on a sandy base and going deeper to 30 meters, the cathedral is a large cavern and cave system. The cavern allow​s properly guided divers to enter. The area is a photographers dream with abundant marine life and interesting features. Re​mpart Serpent or snake reef is another popular dive site in this area. 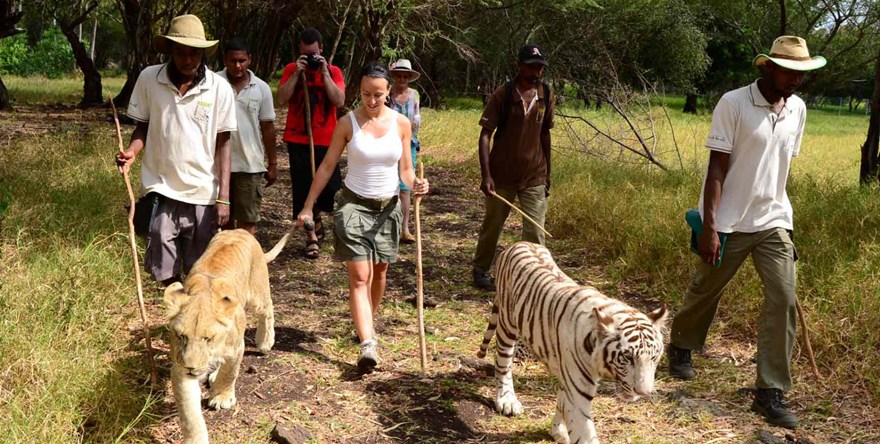 If you haven’t seen Casela, you haven’t seen Mauritius! The park is simply a must-see attraction when visiting the island. You can experience so many unique, thrilling activities , whether you are with your partner, family or friends. 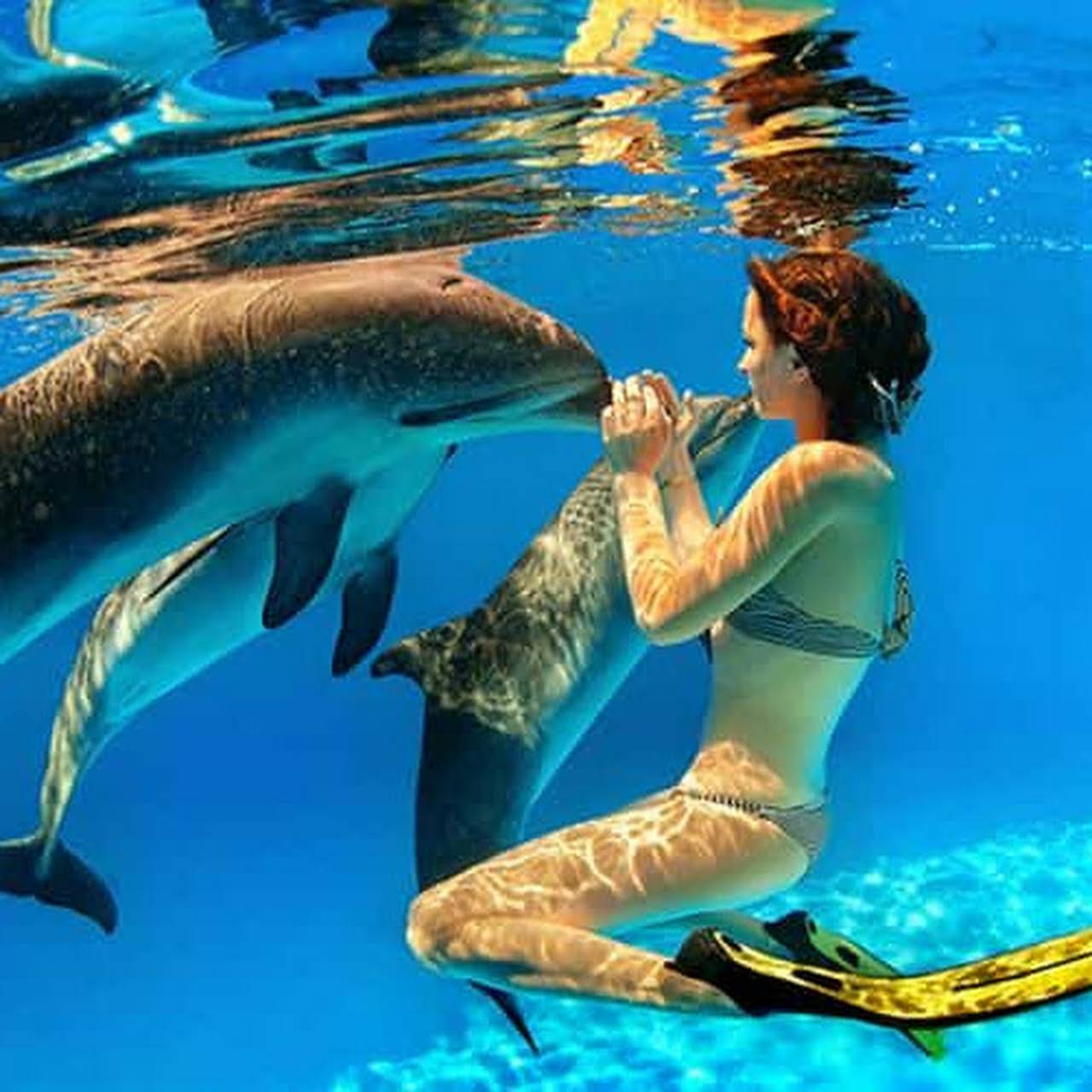 Swim With The Dolphins

The things that you will remember years from now are probably going to be moments that take your breath away. Moments that are difficult to articulate when telling others of your experience. They are the types of moments that are made up of once-in-a-lifetime experiences that most people only dream about. And for many, one of those very moments would definitely be the experience of swimming with wild dolphins in the Indian Ocean while on a sensational holiday in Mauritius. 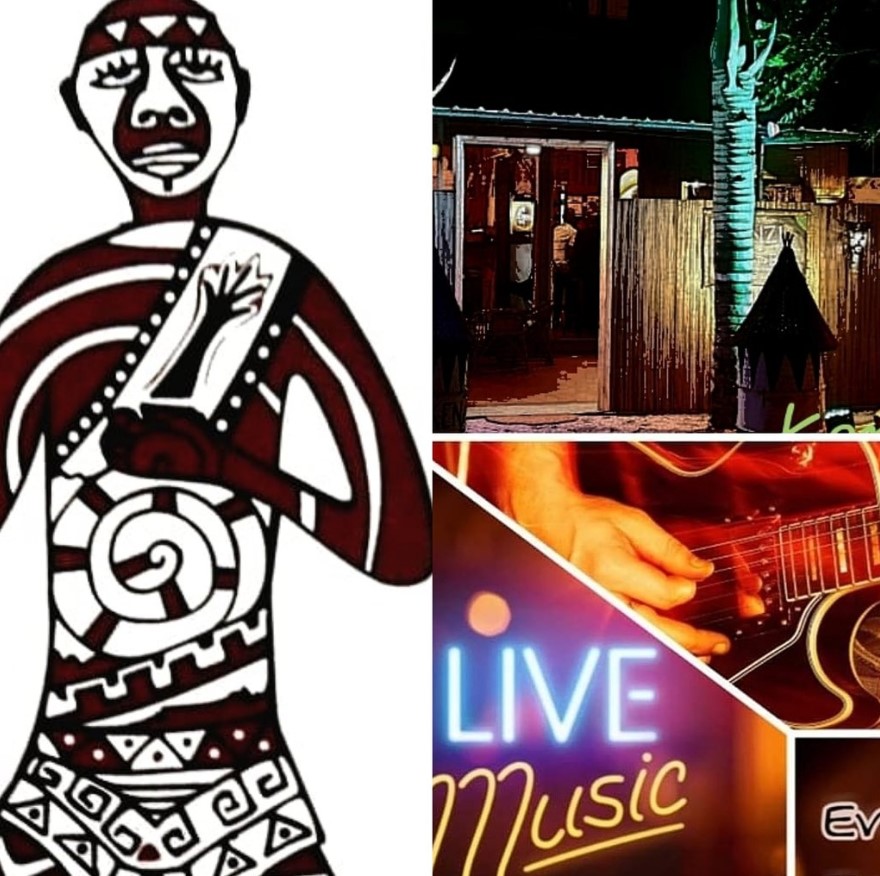 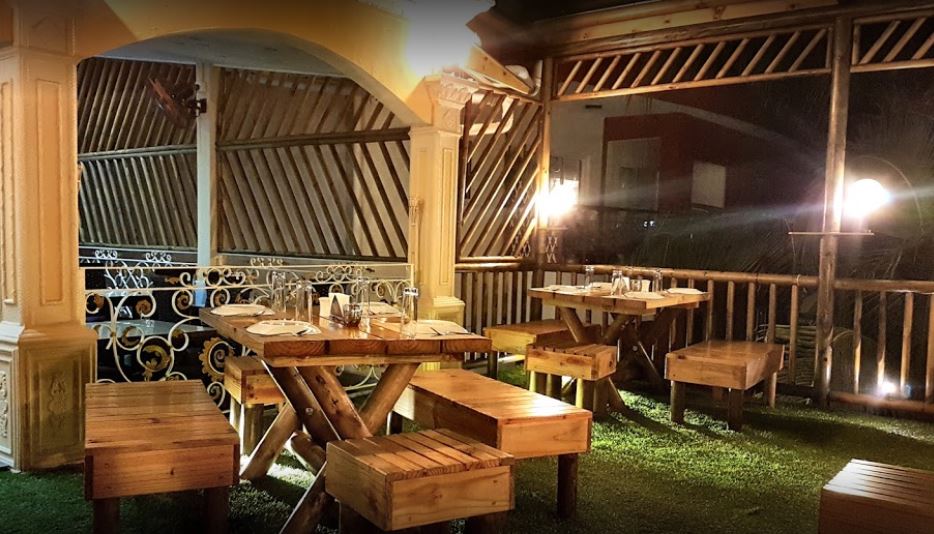 A good restaurant in Flic en Flac Indian-Chinese fusion cooking sounds rather fancy, but the reality is far simpler, featuring dishes like excellent biryanis and noodle dishes alongside more creative dishes such as lobster butter masala. Throw in friendly service and it's no wonder this place gets rave reviews from travellers and locals alike. 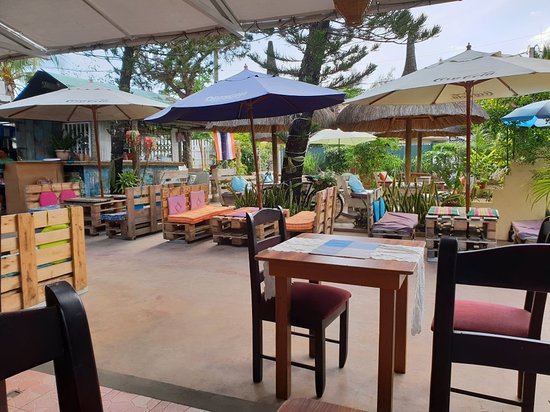 lovely food and nice cocktails. restaurant is built around the garden with a mainly outdoor rustic environment

Q1..Where is Mauritius situated ? Mauritius is a small tropical island situated east of Madagascar in the Indian Ocean

Q2..How to reach Mauritius ? The best and easiest way to reach Mauritius is by air .     The  five main airline which offer regular scheduled flights to Mauritius from the UK and Europe are Air Mauritius, British Airways, Air France, Emirates, Condor  and Corsair .For  the rest of the world customers are advised to check with their travel agents or tour operators for available flights.

Q3..How long does it take to reach Mauritius by air ? This depends from where you are traveling and whether the flight is non-stop or transit one.A non-stop flight by Air Mauritius or British Airways from the UK usually takes eleven and a half hours to reach Mauritius.


Q4..What are the main languages spoken in Mauritius ? In every day life the majority of the population speak creole patois,a sort of native dialect in which French words appear to be more prominent. Apart  from this most Mauritians also speak English and French .

Q5..Are there any dangerous animals or poisonous reptiles in Mauritius ? No poisonous snakes ,reptiles,or insect exists in Mauritius. Moreover its natural habitat is free from dangerous quadrupeds.

Q6..What type of country is Mauritius politically ? Mauritius is a Democracy based on the British system of Government.It is a republic within the Commonwealth with a nominated President.While the President mainly adopts a ceremonial role ( but with limited executive powers over Parliament or the cabinet ), like the Queen in British politics,it is the Prime Minister who is the head of the nation.

Q7..What is the electricity voltage used in Mauritius for domestic purposes ? The power supply throughout the island is 240 volts and all Aquasurmer apartments come with British standard three pin sockets.

Q8..Do I need a visa for Mauritius ? No visa if you are UK or European passport holder you can stay up to six months all you have to have is funds for your stay and a valid return ticket no visa required.Mauritius Attractions

Moka
Those who enjoy seeking out some culture along with their sunshine holiday should visit the town of Moka, seven miles (12km) south of Port Louis, which is not only Mauritius’ academic centre but also blessed with some beautiful scenery and impressive historic manor houses. Moka is the home of the University of Mauritius and the Mahatma Ghandi Institute, tasked with preserving the island’s Indian culture. There is an Indian folk museum to visit; and the Eureka House (now a museum) dating from 1830. Moka can be reached by bus or taxi from Port Louis or Curepipe.

Chamarel
In the southwest corner of the island a twisting road winds from the village of Case Noyal to an interesting geological attraction, the 'Seven Coloured Earth'. This is an undulating mound of varied colored sand, swirled with patches of blue, green, red, purple and yellow earth, apparently caused by the weathering of volcanic rocks. There is also a scenic waterfall nearby set amid jungle vegetation.

Curepipe
Curepipe, sitting atop the high central plateaux of inland Mauritius 12 miles (20 km) from Port Louis, owes its existence to a malaria epidemic in 1867, when thousands fled to the healthy, cooler high ground from Port Louis to escape the mosquitoes. The town is the centre of a spread-out suburban area, and offers some good shopping opportunities. Its main attraction for visitors, though, is an extinct volcano, Trou aux Cerfs, west of the town near the botanical gardens, with a massive wooded crater floor. A road leads to the rim of the volcano and there are spectacular views from the summit. Another natural attraction, just four miles (six km) south west of Curepipe, is the Black River Gorges National Park, home to the rare tambalacoque tree and a variety of exotic flora and fauna.

Ile Aux Cerfs
The small island of Ile aux Cerfs (Stag Island) off the east coast of Mauritius is a popular tourist haven, managed by the adjacent Touessrok Hotel, but open to the public. The island, featuring splendid tropical vegetation and encircled by magnificent beaches, can be reached by boat from the small fishing village of Trou d'eau Douce. The island is equipped with a bar, restaurant and shops, as well as water sports facilities from parasailing to windsurfing. The most recent, and somewhat controversial, development on the island is an 18-hole Bernhard Langer designed championship golf course which affords a sea view from each hole and often requires the novelty of hitting a tee-shot over a natural sea inlet onto the fairway.

Souillac
This small seaside resort is sited along the rugged coast in the southern Savanne district. The appeal of Souillac lies in its scenery, as it is not a bathing spot. In striking contrast to the soft curves of the northern coastline, the high cliffs here drop abruptly to the sea to face the bracing winds of the Indian Ocean as it blows all year round. Among the features of the area is a public garden overlooking the sea, the popular Gris-Gris viewpoint, and the nearby Rochester Falls.

Pamplemouse
About seven miles (11km) northeast of Port Louis, and easily reached by regular buses, lies the island’s premier tourist attraction, the Royal Botanical Gardens of Pamplemousses gardens (now officially called the Sir Seewoosagur Ramgoolam Botanical Gardens in honour of the late Prime Minister, but still colloquially referred to by their original name). The gardens are enclosed by beautiful wrought iron railings which are today in bad repair but when first manufactured in 1862 won a prize at an international exhibition at Crystal Palace in London. The gardens were first laid out in 1735 around a mansion house called Mon Plaisir as a vegetable garden to supply ships calling at Port Louis. Later the house was bought by horticulturists Pierre Poivre, who introduced plant species from around the world interspersed with indigenous species. The garden is redolent with the perfume of fruit and spice trees, and the 24 hectares (60 acres) also sport a collection of stately palms, ebony, mahogany, latania and pandanus. A great attraction is a pond full of the Giant Amazon water lily

MUSIC & DANCE
The séga – the rhythm of the island The Sega, a dance unique to Mauritius, best expresses the ‘joie de vivre’ of its people. Derived mostly from African music dating back from slavery days, the traditional séga is accompanied by traditional instruments, the ravane, a wooden hoop over which a length of goatskin has been stretched tight ; the maravane, which is a sort of wooden box filled with dried seeds which makes a grating sound when shaken; and the triangle, a triangular piece of metal which makes a tinkling sound when taped with an iron rod. The original instruments are fast disappearing, making way for the more contemporary instruments. The dance, itself is the rhythmic swaying of the hips to the pulsating rhythm of the ravane. It starts with a gentle swaying accelerating an exhilarating crescendo

Mauritian Beaches
The beaches of Mauritius are close to perfect, with fine white sand and clear water running to heavenly shades of blue. Some of the island’s best beaches on the west coast are easily reached from Port Louis. Flic and Flac is the longest beach in Mauritius and features a beautiful lagoon. Grand Baie, 12 miles (20km) to the north of the capital, is a major tourist centre, offering water sports, shops, nightlife and restaurants to complement its splendid beach and deep sheltered bay. Also on the north coast road is Perebere, one of the island’s favoured swimming spots. The Baie du Tamarin is at the mouth of the Tamarin River in a beautiful setting, and is popular for surfing with Indian Ocean rollers washing the beach all year. In the southwest is Le Morne Brabant, characterised by a basaltic outcrop and beaches shaded by casuarinas and coconut trees. People who enjoy snorkelling will enjoy Trou-aux-Biches with its shallow waters and coral reefs.